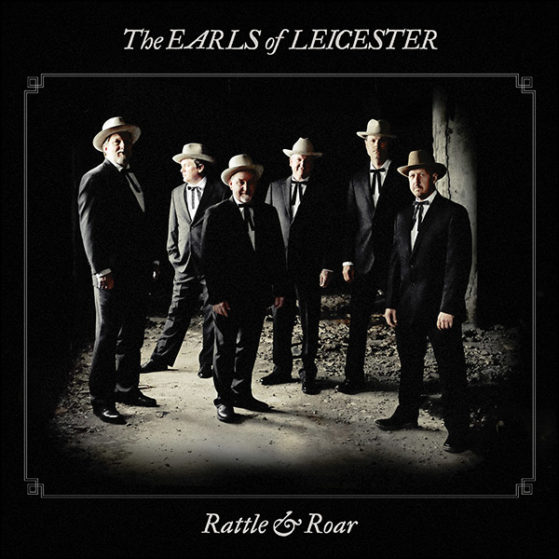 Rattle & Roar is the follow-up to the Earls’ eponymous debut, which inspired tremendous critical accolades, and earned a Grammy award for Best Bluegrass Album. The band also went on to win six International Bluegrass Music Association awards, including the coveted Album of the Year and Entertainer of the Year honors.

Those collaborative deep dives into Flatt and Scruggs by some of the best living musicians––bluegrass or otherwise––built Rattle & Roar, a collection spanning exhumed nuggets and familiar favorites. To capture the feel of a live show, the album was recorded in one room, with all of the band members in a line, no separation between them. “This is about as live as a record can be. I hope listeners can hear the fun that’s going on,” Camp says. “They’re listening to everything go down, right then, at that moment. A lot of music can be made in an instant.”

Rattle & Roar pulses with impish joy and immediacy, uniquely showcasing artists at the top of their game as they delight in their work not just as creators, but also as fans.

The songs’ themes of spirituality, love lost or found, war, and ex-convicts still resonate. The album opener, “The Train That Carried My Girl From Town,” delights in furious revenge wishes delivered with naked sincerity. “I wish to the Lord that train would wreck / kill the engineer and break that fireman’s neck,” Camp confesses somewhat sweetly, then follows with plenty of other innuendo and lines sure to make listeners wonder if they heard him correctly.  Rolling Stone Country premiered the track exclusively. Listen to it here: http://rol.st/1qZi7rS

“All I Want Is You” is a showpiece, offering Camp a chance to croon. “Lester Flatt was sort of the Bing Crosby of this genre of music,” Douglas says. “He could have been a big band singer. He sang the entire melody, all changes, augments––they didn’t have to be whole notes. He really stretched, and so does Shawn. I love hearing him sing it.”

Harmony-drenched “You Can Feel It in Your Soul” bounces with gospel fervor cushioned by warm strings, while “I’m Working on a Road to Gloryland” features multiple vocal bows worthy of a riverside revival.

Instrumentals including “Flint Hill Special” and “Buck Creek Gal” are spirited back-and-forths between giants. “You can’t pretend or fake your way through this stuff,” Camp says. “It’s got to be right, or it’s wrong. And when we play together, it’s right.”

The lush instrumental “Steel Guitar Blues” was discovered on an old reel-to-reel recording, as was “Pray for the Boys,” the album’s solemn closer. “My Mother Prays So Loud in Her Sleep” features a three-part vocal ascension that the Earls took pains to get right. “When we were rehearsing, we all got our heads together, listened to the original, and asked, ‘Okay, who is that on the high part? Is that Curly [Seckler] or Lester? We scoped in, and now, we’re sure it’s Lester,” says Douglas. “It’s things like that that we do together that make this band really work and exceptional.”

As much as the Earls are a reincarnation of a sound that older generations have missed––an unexpected Proustian take on bluegrass––the band is especially interested in reaching new ears. “I hope people who don’t know Flatt and Scruggs hear this and think it’s totally new music,” Douglas says. “Then, I hope they find out what we’re doing and go out and buy every Flatt and Scruggs record they can find.”